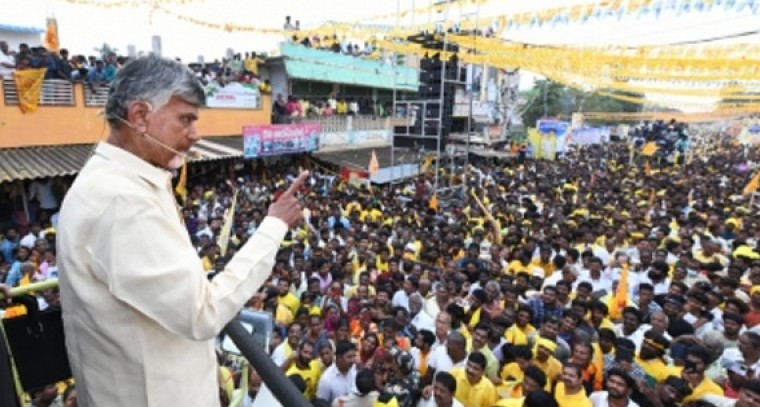 Amaravati,  (IANS) Telugu Desam Party (TDP) national president N. Chandrababu Naidu called on people of Andhra Pradesh to save the state by throwing out YSR Congress Party (YSRCP) from power saying this is the last chance for them.

The former chief minister launched 'Idemi Kharma Mana Rashtraniki' (What is this ill-fate for our State) in Eluru district on Wednesday.

He called for awareness among people and hoped that at least now people will heed his advice and come forward fearlessly. "This is the last chance for the state, not for me. Power is not new to me. I served as the chief minister in united Andhra Pradesh. I have been in politics for 40 years. I don't have anything new to achieve," said the leader of opposition.

Naidu said Chief Minister Jagan Mohan Reddy and the YSRCP leaders are threatening the beneficiaries that the welfare schemes that they are getting now will be stopped if they attend the public meetings being addressed by the TDP leaders.

"A woman is dare enough to attend my meeting though she is threatened of taking back her house-site if she attends the public meeting," Naidu said, and wanted all the people to show such courage.

Recalling that he reviewed the Polavaram project every week and completed 72 per cent of the works, the TDP leader said that Jagan drowned the project in the Godavari in the name of reverse tendering.

The former chief minister termed the Supreme Court order transferring the trial in the murder of Jagan Mohan Reddy's uncle Y.S. Vivekananda Reddy to a CBI court in Hyderabad a slap on the face of YSRCP government.

He said Jagan has no right to continue in power and demanded a reply from him on the apex court order.

"If Jagan cannot give any reply on this, he should resign as the Chief Minister forthwith," he added.

"Jagan initially played some tricks in the murder of his paternal uncle, YS Vivekananda Reddy, and later accused me of killing him. After becoming the Chief Minister, he approached the court saying that there is no need for a CBI probe into the murder case. Jagan even created a lot of troubles for Viveka's daughter, Sunitha Reddy, and also created several obstacles for CBI probe into the case," Naidu said.

He noted that after a prolonged fight by Sunitha Reddy in the case, the Supreme Court transferred it to Telangana. He asked whether all the YSRCP leaders too similarly kill their respective uncles.

The TDP leader said that the inefficient YSRCP Government is blaming him for all the problems that the State is now facing.

"Even if a couple gets separated, the ruling party leaders are blaming me," he remarked, and made it clear that he cannot use the kind of objectionable language that the YSRCP leaders use.