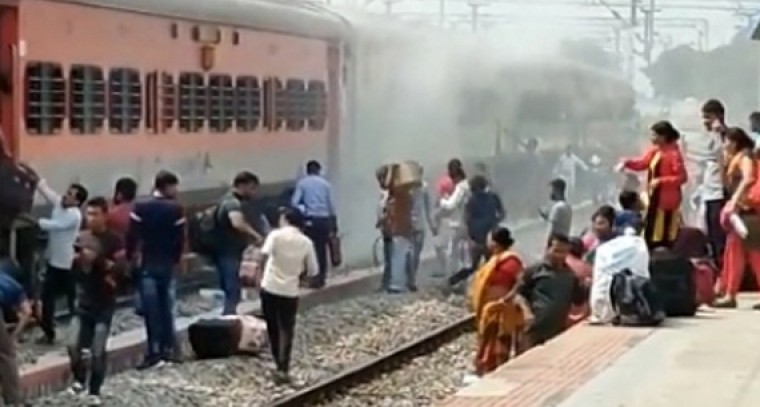 Amaravati, Nov (IANS) Smoke in one of the coaches of Duronto Express near a railway station in Andhra Pradesh's Chittoor district on Sunday sent panic among passengers. However, there were no casualties.

The smoke was noticed in one of the coaches of Sir M Visvesvaraya Terminal-Howrah Duronto Express when it was approaching Kuppam Railway Station. As soon as the train was stopped, some passengers deboarded in panic.

However, South Western Railway (SWR) has clarified that there was no fire on the train and the smoke was due to friction of the brake block.

"On train no 12246, Sir M Visvesvaraya Terminal-Howrah Duronto Express while approaching Kuppam Station, Chittoor Dist (Bengaluru division/SWR), the Train Manager (Guard) noticed smoke coming in from one of the coaches at about 12.50 p.m.," SWR said in a statement.

"As per standard SOP, the train was stopped and checked by the train crew. It was found that there has been a brake binding and smoke had come due to friction of the brake block in coach SE LWSCN 193669/S9," it added

The railway officials said the train crew attended it immediately and the train resumed its journey at 1.33 p.m.

"There has been no injury/casualty to any passenger," they said.