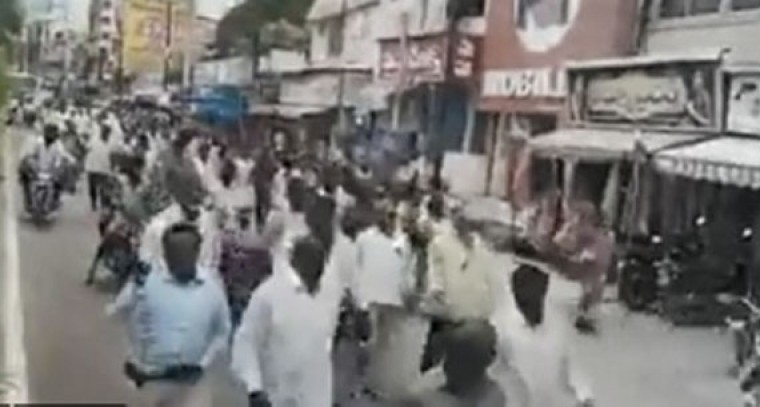 Vijayawada, Sep (IANS) Tension prevailed in Gudivada town of Andhra Pradesh's Krishna district on Sunday during a protest by the leaders of opposition TDP against former minister Kodali Nani over his remarks against TDP president N. Chandrababu Naidu, general secretary Nara Lokesh and women leaders of the party.

Police detained Telugu Desam Party (TDP) leaders who reached Gudivada and were proceeding to the police station to lodge a complaint against Nani, MLA from Gudivada.

Soon after the leaders left the TDP office, the police arrested them. They included former minister Uma Maheswar Rao and former chairman of RTC Varla Ramaiah. The arrested leaders were shifted to Gudur police station.

Some more TDP leaders reached the town either by APSRTC buses or on two-wheelers to stage the protest. They were on their way to One Town police station to lodge the complaint but they were stopped by the police, who had erected barricades.

The police officers told TDP leaders to give them their complaint. However, the TDP leaders insisted that they be allowed to go to the police station and lodge the complaint. There was heated argument between the two sides, leading to pushing and jostling.

In the melee, some of the leaders managed to remove the police barricades. Raising slogans against Nani, they reached the police station but found its gate locked. They questioned the police officers over locking the gate instead of receiving their complaint. The police officers allowed four leaders to enter the premises. They lodged a complaint against the YSR Congress Party (YSRCP) leader and demanded action against him.

The TDP has taken strong exception to certain remarks made by Nani against women leaders of the party and also against Chandrababu Naidu and his son Nara Lokesh.

Earlier, a delegation of TDP leaders from Krishna district lodged a complaint with Tadepalli police against Nani.

Cautioning the YSRCP MLA to control his mouth, the TDP leaders said Nani would be chased away from Gudivada soon.

Women leaders of TDP had also tried to lay siege to the house of Nani in Gudivada on September 6.