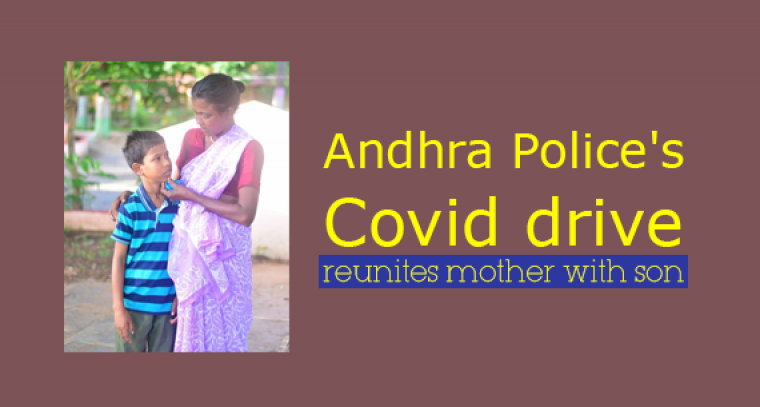 Amaravati, July (IANS) A state-wide drive launched to screen orphans and street kids for Covid-19 has united a grieving mother with her son who was missing for four years. The authorities also rescued 10 children hailing from Bihar who were forced to live as bonded labourers.

The good turn of events took place barely a couple of days after 'Operation Muskaan Covid-19' was launched by the Andhra Pradesh Police.

Bobba Sri Lalitha, a resident of Palakollu in the West Godavari district, lost her husband soon after the birth of her second son, Srinivas. Struggling to make ends meet, Lalitha was forced to take up menial jobs, including working as a rag picker to feed her sons.

In 2016, Srinivas fled home and reached the Vijayawada railway station. From there, the railway police rescued Srinivas and shifted him to a child care centre in Vijayawada and has been there ever since.

During the course of Operation Muskaan, Srinivas finally revealed that he is a native of Palakollu in the West Godavari district. The authorities then sprung into action and facilitated the reunion of Srinivas with his mother.

DGP Gautam Sawang said, "It is very heartwarming to be able to facilitate the reunion of a mother-son duo after almost four years. Things like these give us immense satisfaction and keep us going. Each kid who has been rescued has a heart wrenching story. It is to make this kind of difference in the lives of the vulnerable that this initiative was launched."

Police officials said that the 'Muskaan Covid-19' initiative has led to the rescue of 2,739 kids within 72 hours of its launch. During the drive, the police have also rescued 10 children employed as 'bonded labourers' in Perecherla. All the kids hailing from Bihar have now been rescued and shifted to child care homes while a case has been registered against the management under relevant sections of the law.

The drive will continue till July 20.