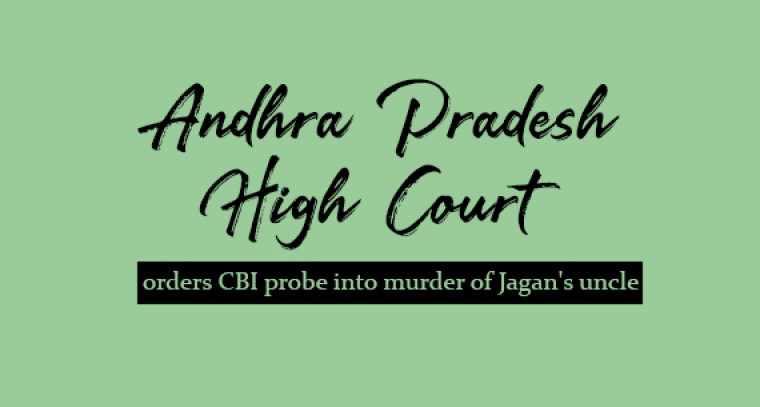 Observing that there is no progress in the investigation even after nearly a year, the court directed that the case be investigated by the CBI.

The court gave the direction on petitions filed by Vivekananda Reddy's daughter N. Suneetha Reddy, her husband and others, seeking a CBI probe.

The former state minister and MP was found murdered at his residence in Kadapa on March 15, 2019, a few days before the election.

Suneetha Reddy expressed suspicion over the conduct of her cousin and Kadapa MP Y.S. Avinash Reddy and his father Y.S. Bhaskar Reddy.

In her petition filed in November, she said the shifting of police officials investigating the case and the slow pace at which the probe was being carried out also gave rise to suspicion.

She wondered why Jagan Mohan Reddy is not handing over the case to the CBI though it has been eight months since he assumed office as Chief Minister. She recalled that as the then Leader of Opposition Jagan had demanded a probe by the CBI and had submitted a petition to the Governor and even filed a writ petition in the High Court.

Suneetha Reddy also questioned the wisdom of the Chief Minister in constituting another Special Investigation Team (SIT) to investigate the crime. The petitioner alleged that the SIT ended up interrupting the investigation and its conduct gave rise to several doubts about the intentions of the state police in implicating innocent people in the case, so as to allow the real culprits to go scot-free.

68-year-old former MP Vivekananda Reddy was alone at his house when unidentified persons barged in and killed him. He was killed hours before he was to launch YSR Congress Party's election campaign in Kadapa.

Jagan Mohan Reddy, then leader of opposition, had demanded a CBI probe into his uncle's murder. He had blamed the then ruling TDP for the killing. Jagan said that as the TDP was in power its leadership was aware of the conspiracy whenever a death occurred in his family.